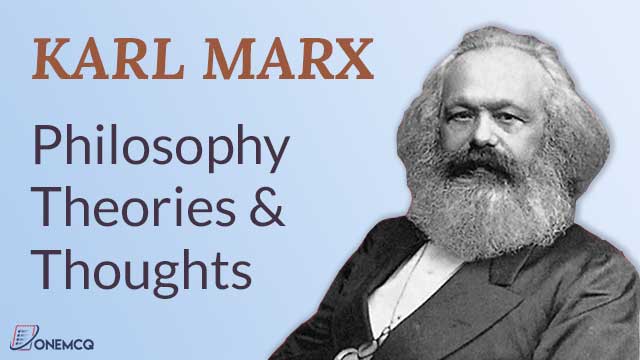 Here in this article, you will find Karl Marx’s Life, Theories, Politics, Philosophy, and Thoughts.

German economist, philosopher, and revolutionist, Karl Marx’s writings form the basis of the body of ideas known as Marxism. As one of the most original and influential thinkers of modern times, Karl Marx produced, with the aid of Friedrich Engels, much of the theory of modem socialism and communism.

Born on May 5, 1818, Marx lived in a period of unrestrained capitalism when exploitation and misery were the lots of the industrial working classes, and it was his and Engels’ humanitarianism and concern for social justice that inspired his work.

A student at the University of Berlin, Marx was strongly influenced by the philosophy of G. W. F. Hegel and by a radical group called Young Hegelians, who attempted to apply Hegelian ideas to the movement against organized religion and the Prussian autocracy.

In 1841, Marx received a doctorate in philosophy. In 1842, he became editor of the Rheinische Zeitung in Cologne, a liberal democratic newspaper for which he wrote increasingly radical editorials on social and economic issues. The Prussian government in 1843 banned the newspaper and Marx left for Paris with his bride, Jenny von Westphalia.

There he went further in his criticism of society, building on the Young Hegelian criticism of religion. Applying Ludwig Feuerbach’s idea of alienation to private property, Marx elaborated on the idea that alienation had an economic base. He called for a communist society to overcome the dehumanizing effect of private property.

In 1845, Marx moved to Brussels, and in 1847, he went to London. He had previously made friends with Friedrich Engels, the son of a wealthy textile manufacturer who, like him, had been a Young Hegelian. They collaborated on a book, “The Holy Family” that was a criticism of some of their Young Hegelian friends for their stress on alienation.

In 1845, Marx jotted down some notes, Theses on Feuerbach, which he and Engels enlarged into a book, “The German Ideology” in which they developed their materialistic conception of history. They argued that social and economic forces, particularly those related to the means of production, determined human thought. They developed a method of analysis they called dialectical materialism, in which the clash of historical forces leads to changes in society.

In 1847, a London organization of workers invited Marx and Engels to prepare a program for them. It appeared in 1848 as the Communist Manifesto. In it, they declared that all history was the history of class struggles. Under capitalism, the struggle between the working class and the business class would end in a new society, a communist one.

In 1867, Marx published the first volume of “Das Kapital” in which he worked out a new theory of society. Marx showed that all social systems are economically motivated and change as a result of technical and economic changes in methods of production.

The driving force of social change Marx found to be in the struggle that the oppressed classes wage to secure a better future. Marx’s theory of historical materialism implies that history is propelled by the class struggle with communism and a classless society as the final stage when man will have emancipated himself from the productive process

Illness and depression marked Marx’s last years. He continued to write treatises on socialism, urging that his followers disdain softhearted bourgeois tendencies. His wife died in 1881, and his eldest daughter is 1883, shortly before his own death on March 14, 1883.