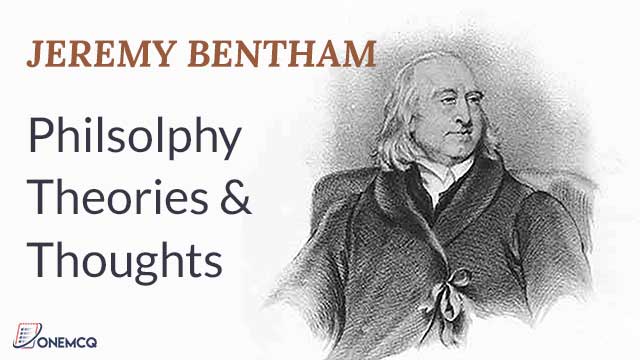 Here in this article, you will find Jeremy Bentham’s Life, Philosophy, Politics, Theories, and Thoughts.

Jeremy Bentham, the son of a lawyer, was born in London in 1748.  A brilliant scholar, Bentham entered Queen’s College, Oxford at twelve and was admitted to Lincoln’s Inn at the age of fifteen. Bentham was a shy man who did not enjoy making public speeches. He, therefore, decided to leave Lincoln’s Inn and concentrate on writing. Provided with £90 a year by his father, Bentham produced a series of books on philosophy, economics, and politics. Jeremy Bentham died m 1832.

Bentham’s family had been Tories and for the first period of his life, he shared their conservative political views. This changed after Bentham read the work of Joseph Priestley. One statement in particular from “The First Principles of Government” and the “Nature of Political, Civil and Religious Liberty” (1768) had a major impact on Bentham: “The good and happiness of the members, that is the majority of the members of the state, is the great standard by which everything relating to that state must finally be determined.”

Another important influence on Bentham was the philosopher David Hume. In books such as “A Fragment on Government (1776)” and “Introduction to the Principles of Morals and Legislation (1789)”, Bentham argued that the proper objective of all conduct and legislation is “the greatest happiness of the greatest number”. According to Bentham, “pain and pleasure are the sovereign masters governing man’s conduct”. As the motive of an act is always based on self-interest, it is the business of law and education to make the sanctions sufficiently painful in order to persuade the individual to subordinate his own happiness to that of the community.

In 1798, Bentham wrote “Principles of International Law” where he argued that universal peace could only be obtained by first achieving European unity. He hoped that some form of European Parliament would be able to enforce the liberty of the press, free trade, the abandonment of all colonies, and a reduction in the money being spent on armaments.

In “Catechism of Reformers (1809)” Bentham criticized the law of libel as he believed it was so ambiguous that judges were able to use it in the interests of the government. Bentham pointed out that the authorities could use the law to punish any radical for “hurting the feelings” of the ruling class. Bentham also attacked other aspects of the legal system such as “jury packing”.

Radical reformers such as Sir Francis Burdett, Leigh Hunt, William Cobbett, and Henry Brougham praised Bentham’s work. Although written in a complex style, radical publishers attempted to communicate their ideas to the working class. Jonathan Wooler published extracts in his journal Black Dwarf and eventually published a cheap edition of “Catechism of Reformers”. When Burdett introduced a series of resolutions in the House of Commons in July 1818 demanding universal suffrage, annual parliaments, and vote by ballot, he quoted the writings of Jeremy Bentham to support his case.

In 1824, Bentham joined with James Mill (1773 1836) to found the Westminster Review, the Journal of the philosophical radicals. Contributors to the journal included Lord Byron, Samuel Taylor Coleridge, and Thomas Carlyle.

Bentham’s most detailed account of his ideas on political democracy appeared m his book “Constitutional Code (1830)” In the book, Bentham argued that political reform should be dictated by the principle that the new system will promote the happiness of the majority of the people affected by it. Bentham argued m favor of um versa! suffrage, annual parliaments, and vote by ballot. According to Bentham, there should be no king, no House of Lords, no established church The book also included Bentham’s view that women, as well as men, should be given the vote.

In Constitutional Code,” Bentham also addressed the problem of how government should be organized. For example, he suggested the introduction of rules that would ensure the regular attendance of members of the House of Commons Government officials should be selected by competitive examination. The book also suggested the continual inspection of the work of politicians and government officials. Bentham pointed out they should be continually reminded that they are the “servants, not the masters, of the public”.